In 2004, Lord Clark of Kempston died aged 86. “Lord who of where?” you might be forgiven for asking.
I recall attending a social event back in the 80s where Sir William – as he was then – and his wife Lady Clark were in attendance. He seemed a kindly grandfather-type figure, and she was equally amiable. I remember that his dinner suit trousers were too short; not something you would expect from a man of his calibre. Looks, however, can deceive.
Sir William was, in reality, a very tough man and a shrewd politician. The Member of Parliament for Croydon South, he rose up through the political ranks to hold several key positions. He epitomised the era of ‘The Iron Lady’, Britain’s first woman Prime Minister Margaret Thatcher, and was not afraid of being confrontational when standing his ground in the House of Commons. He championed the austere economics of monetarism, and notably became the chairman of the Conservative parliamentary finance committee (1979-92), which was an important position in which he became very influential. He was created a life peer in 1992.
However, it is 1988 to which I wish to refer; specifically November 29th. During a House of Commons economic debate, at a time when the UK’s economic performance was in question, Sir William stated, ‘We take our economic pulse too frequently. Whenever an economic figure is produced we take the pulse and hear gloom and doom.’ Move forwards to 2018 and we turn this statement on its head.
It was reported yesterday that UK Gross Domestic Product (GDP) data is to be published monthly for 'higher-quality' figures. The Guardian newspaper of July 8th reported, ‘Britain will this week become one of the first major developed economies in the world to publish economic growth figures on a monthly basis. Starting from Tuesday, the Office for National Statistics will produce estimates for the monthly growth in gross domestic product (GDP) alongside a range of other statistical indicators for the health of the British economy’. 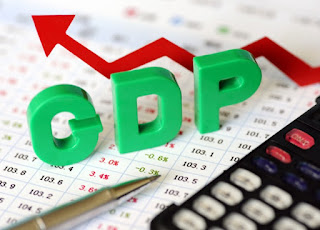 GDP is held as being one of the best measures available for assessing the wealth of the country and the living standards of people in the UK, but it is not fool proof by any means. GDP is calculated by adding together:


Under the old system estimates for GDP were published once every quarter, so the new approach is a distinct improvement, as politicians and central bankers operating in the current volatile economic environment need to know what is happening to the economy in real time to facilitate good decision-making.
However Garry Young, the director of macroeconomic modelling and forecasting at the National Institute of Economic and Social Research, said. “A downside of the new monthly data is that it will be volatile, subject to revision and may sometimes give a misleading steer. That means that policymakers and other users will need to make sure they do not overreact to the latest data, unless it is confirmed by a range of other evidence.”
I wonder what Sir William would have made of this? The ability to understanding the workings of the economy have taken on a new significance since the financial crisis of 2007, and as Britain prepares to leave the EU. Better quality, more-timely official data has never been so necessary to our economic well-being.
This is just one of the subject areas debated passionately by ECBM students during their study programmes, drilling down critically in to the depths of this fascinating world, and priming themselves for the future which faces them in their careers.
What is your opinion on this economic development? Do come and share it with us.
Posted by Unknown at 06:56